Heart failure (HF) remains a common cause of death and disability and is associated with altered signal transduction via b-adrenoceptors and G proteins, resulting in reduced adenylyl cyclase-mediated cAMP formation and contributing to contractile dysfunction. Nucleoside diphosphate kinases (NDPKs) can modulate G-protein activity and are enriched at the plasma membrane of end-stage HF patients. However, their relevance for HF pathophysiology is largely unknown, particularly for the NDPK‑C isoform.

Together with collaborators from various centers in Germany and abroad, Jordi Heijman published a study in the most recent edition of Circulation, showing for the first time a potential critical role for NDPK-C in the suppression of cAMP formation in HF patients. In particular, this study identified that NDPK-C is crucial for the interaction between NDPKs and G proteins, building complexes and scaffolding them at the plasma membrane. These interactions regulate cAMP levels and cardiomyocyte contractility. In HF patients, NDPK-C switched from predominantly Gas stimulation to activation of Gai. Our findings provide a potential mechanism for the detrimental decrease in cAMP and related dysfunction previously described in HF patients, and position NDPK‑C as a novel critical determinant of bAR/cAMP signaling that contributes to impaired cardiac function and remodeling in human HF. 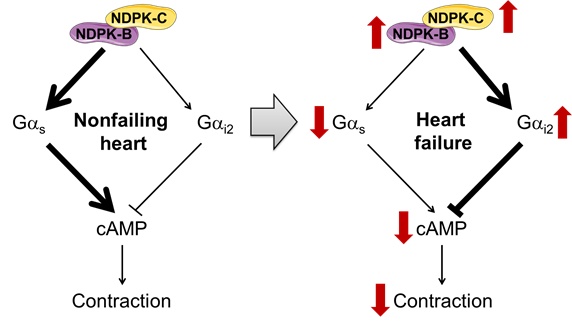